One Magazine’s Bruce Hetherington recently spent some time in the company of a happy band of tool restorers discussing just what it is that makes old tools magical.

My earliest memories of my Dad involve him in his shed with his tools. He never threw anything away, from used screws to bits of old washing machine, everything found a place in a jar on one of dozens of shelves, and his tools were all meticulously cared for and arranged across the walls.

His grandchildren nicknamed him ‘hammer’ because that’s normally what he had in his hand, and before they could articulate sentences they could recite the names of his tools by heart. “Stanley knife, Black & Decker drill, Norton sandpaper” – it goes on…

The only other thing he collected with anything like the same dedication was books. Hundreds of them that he would read and then house on bookshelves running the whole way around the living room. When he passed away a few years ago I spent hours paging through them, imagining his hands turning the pages, and marvelling at his thirst for knowledge.

Sadly the vast majority of those books made their way to various charity stores and a couple of collectors, but not the tools. Those I decided to try and keep, even though my own DIY skills are dire. There is just something about those tools, and that massive old workbench, that acts for me as the boulder in mid-stream. I built a shed to house most of them and the workbench, and that’s where I go when I need to talk to my Dad.

I think we all have these kinds of attachments to our Dad’s tools and that’s why it was such a heart-warming experience to spend some time with Age UK Exeter’s Men in Sheds initiative, at their workshop in St. Thomas and in their ‘pop-up’ shop on the corner of Paris Street, opposite the Princesshay car park. If you have to part with your dad’s tools then this is the place where tools go to be loved, restored and returned to use.

The St. Thomas workshop is essentially the ‘shed’ and on Mondays and Tuesdays it houses the Tools Company, where two members of staff and a number of volunteers buddy up with men who have physical disabilities or long-term health conditions.

On Wednesdays and Thursdays the workshop is host to Men In Sheds, made up of more physically able older men. Together the men have developed such a successful project that it is now a fully-fledged social enterprise helping part-fund Age UK Exeter. Across the week men congregate to restore the tools, chew the fat and get involved in everything from simple rubbing down and varnishing to high-end woodworking skills to produce garden benches, bird tables, bug boxes and garden trugs. Today some 60 men are involved.

Martyn Rogers, CEO, Age UK Exeter, says: “We work closely with Exeter College’s head of health and safety who signs guys off on their competency to use the woodworking machines donated to us by the Exeter Chiefs Charitable Foundation who have also recently funded a van for our collections and deliveries. We have trained two of the men to undertake electrical Portable Appliance Testing so they can ensure that all the electric tools, mowers and hedge trimmers we receive are safe to be sold to the public.”

The restored tools, benches, bird tables and everything else are then taken over to the shop on Paris Street which is run by the men too, and open Tuesdays to Saturdays from 10am to 4pm. When I walked in there recently, Martyn Liddon and two colleagues were polishing up a freestanding lathe that looked in immaculate condition. Martyn told me that the response from the public has been fantastic over the past six years. I was not surprised – seeing the range of tools on offer at unbelievably good value I wondered aloud why anyone would ever buy a new tool again.

“We get hundreds of tools donated, but that wouldn’t help us if we didn’t manage to sell hundreds of tools too,” he says, adding that right now the shop needs garden tools. This must be a summer thing, as there’s been a run on the stock of garden tools, all of which are sold in excellent condition thanks to the ongoing support of Greenman Garden Tools down in Heathfield, who are happy to swap ash handles for examples of old tools they haven’t yet got in their tool museum (and even when there are no old collectables to swap, the company helps out).

“I swapped an old Morris bill hook for 30 ash handles the other day because that was one Adam Greenman didn’t have in his collection!” says Martyn. There is a backstory here about how Adam’s grandmother was the daughter of Arthur Morris who owned Dunsford Mills who made the legendary bill hooks, and who were once one of the biggest employers in the Teign Valley, but that waits for another day.

The Men in Sheds will travel to collect tools so if you have any you would like to see lovingly restored and put back to use please give them a call, or email – and similarly, if you are looking for tools you won’t find a better deal anywhere. Pop into the Paris Street shop – six screwdrivers for a pound, any takers?

You can call the shop during its opening hours of 10am – 4pm, Tuesdays to Saturdays, on 07707 085 680 For more information on Age UK, visit www.ageukexeter.org.uk 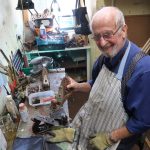 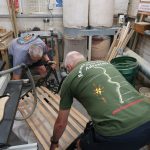 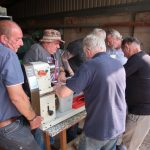 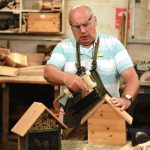 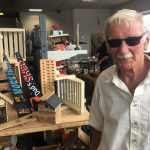