After a pleasant drive from Exeter out to Sidford, my husband and I arrived at The Salty Monk, which was originally a Salt House used by the Benedictine Monks who traded Salt at Exeter Cathedral! We were shown through the characterful building to the two AA Rosette Garden Room Restaurant, which is elegantly decorated and inviting. Tables were properly dressed with crisp white linen and contemporary accessories and the attentive staff couldn’t do enough for us from the offset.Our meal began with a glass of soft, mature Rioja Crianza Lopez de Haro, while we studied the creative and mouth-watering menu. Owners Andy and Annette, both chefs by trade, pride themselves on using the best fresh local ingredients and wherever possible organic. Talking to Andy, we discovered that that they make all of their own pasta, rolls, ice creams, sorbets, sausages, chutneys and jams, as well as curing their own bacon and smoking their own fish and meat, which I felt spoke volumes about their passion for food.

Our meal began with an Amuse course of salmon smoked on the premises, ling flakes and caper berries – I hadn’t eaten in a restaurant that went to the trouble of an Amuse course for some time and it really set the tone for the experience. For a starter I chose goats cheese beignets on a smoked tomato sauce. These were melt in mouth delicious and super indulgent. My husband had the chicken and wild mushroom sausage with a mild mushroom fondant, which caused a little food envy on my part – this had a very unique, subtle and Moorish flavour. We ended up sharing.

The main course caused much deliberation, owed to the strength and extensiveness of the menu. I was very tempted by the roast breast of Creedy Carver duck with fondant potatoes and a smoked onion puree, but after spying over onto the table of some other dinners soaking up the soft music and pleasant atmosphere, I decided on the medley of fish. My monkfish, scallops and prawns were all impeccably cooked and their flavours complimented perfectly by creamy fish and white wine sauce. I was very excited when it was served to the table as it was served with a wonderfully green wild garlic pasta and julienne of leek. The tastiest fish I’ve eaten and suitably fancy enough that I’d never attempt it at home, which is exactly what I want when I eat out. My husband, who’s a real steak man, opted for the fillet steak medallion, which was cooked to perfection and served with the most devine and horseradish ravioli and finished on a rich beef jus.

I was satisfied before my dessert, but our food had been so good it seemed a crying shame not to indulge. I opted for the treacle tart, which was a very generous size, served hot from the oven and served with clotted cream and peppered pineapple. To be honest, I ordered the tart because I was curious about the flavour combinations and in this cause curiosity didn’t kill that cat – it was sensational. We left after a coffee, properly made of course and somewhat a work of art in itself, served with fudge, ginger and marshmallows, like the cats that got the cream. 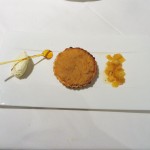 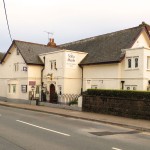 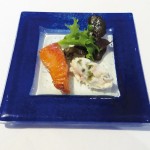 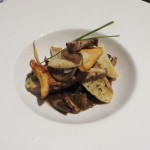 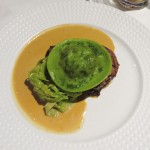