The Cridford Inn, the oldest pub in Devon, and possibly in England is a building steeped in history. Dating back to 825AD, and mentioned in the Domesday Book, it has been in continuous use since, as both a nunnery and a farm before finally becoming the inn that stands before us today.

Nestled on the border of the Dartmoor National Park, in the village of Trusham, the Cridford Inn is approached via minor roads with high hedgerows and rolling green hills. The winding lanes make you feel as if they have remained unchanged for the many centuries since the inn was built and immediately set the ambience for the experience ahead. With cob walls, a thatched roof and charming inglenook fireplaces, as well as oak beams thick enough and black enough to have seen countless thousands of cosy nights, it is every inch the traditional English inn.

Gin connoisseurs will be particularly impressed by the extensive bar which includes over 100 gins including Quick Gin; brewed in partnership with a local distillery especially for the Cridford Inn. Served with a garnish of orange, it is more than just a comfortable slice of Devonian history.

To help us stave off hunger whilst waiting we ordered some olives (£3.50) and homemade bread and dipping oils (£3). The in-house marinated olives were superb; succulent and meaty without being too salty or bitter, they were incredibly moreish and were complemented excellently by the delicious selection of fresh bread.

Despite the inn being 1200 years old the menu is as current as anything you’re likely to find and wouldn’t be out of place in a more contemporary restaurant that you might find within the city. We decided on starting with the Heritage Beetroots with Goats Curd (£6.95) and the Heirloom Tomatoes and Burrata (£6.95). The beetroots and goats curd, although not a large portion, was incredibly well presented and tasted as good as it looked. The earthy flavours of the beetroots offset the saltiness of the goats curd which in turn was complemented by the sweetness of the candied walnuts and the raspberry vinaigrette. The Heirloom Tomatoes and Burrata – mozzarella and cream formed into a ball – were also beautifully presented and, although a simpler taste, they were still excellent with the creamy, saltiness of the cheese working perfectly with the succulence of the ripe tomatoes and sweetness of the mint.

Having polished off our starters we moved onto mains. I chose the 12oz Elston Farm Ribeye Steak (£20) whilst my wife chose the Ashburton Pork Belly (£14.95). The steak, ordered medium/medium rare, was cooked just as I’d specified and served with a mouthwatering, thyme-infused butter. The Ashburton Pork Belly was, to be frank, one of the best my wife has ever eaten. Succulent, tender and served with sweet and savoury marjoram jus – a pairing that, for me, turned a cut of meat more commonly associated with a Sunday roast into fine dining.

For dessert we ordered the decadent sounding Dark Chocolate Tart with Salt Caramel and Milk Ice Cream (£5.95) and the Honeycomb Cheesecake (£5.95). The tart felt very grown-up and managed to beautifully combine the sweet and bitter flavour that sums up dark chocolate whilst the honeycomb cheesecake was light, fluffy and offered an effortless way to finish off a delightful meal.

The Cridford Inn offers the perfect balance of old-world character and charm with a modern menu of quality, locally-sourced food and drink in a relaxing setting. It may be off the beaten track but it is certainly worth a visit. 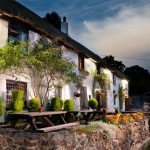 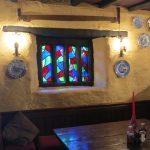 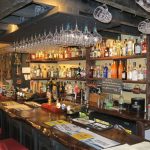 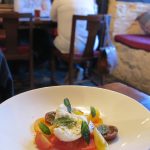 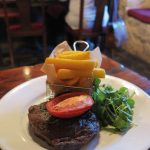 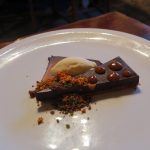