What first struck me when we arrived at Lloyds Kitchen on Saturday night was the contrast between the quiet high street and the busy, lively restaurant on Catherine’s Street. Virtually every table was occupied and even the newly built conservatory was filled with diners tucking into what looked like delicious, beautifully presented British fare. Having talked about the upcoming summer menu with Lloyd during a recent One Mag interview, I was very excited to be given the opportunity to sample the cuisine first hand.

On arrival, my husband and I were greeted by a very friendly waitress and guided to our table where we set about studying the menu and soaking up the vibrant atmosphere. I was particularly impressed to note that despite the inevitable bustle, the restaurant still delivered a romantic and intimate vibe. From the soulful background music to the retro soft lighting, my husband and I immediately relaxed.

After much deliberation, we settled on starters of a seafood basket (£7) and duck spring rolls (£6). My seafood basket was made up of spiced king prawns & crispy calamari and was served with garlic aioli and a blistered lemon. The seafood was perfectly cooked, melted in the mouth and was complimented superbly by the tangy accompaniments. The duck spring rolls, which, we were informed, were a new addition to the menu, were delightful. Light, crispy filo pastry filled with chunky, rich duck and crisp vegetables. Both starters were presented beautifully on slate plates and we polished them off far too quickly!

For our mains, I opted for the lamb cutlets (£16) and my husband chose the fish and chips (£12). When my lamb arrived I was once again impressed by the presentation – two perfectly cooked cutlets, nestled on a bed of crushed minted peas and accompanied by a mini Le Creuset dish filled with crispy, sautéed potatoes. The meat was delicate and well seasoned, the watercress side salad was light and fresh and the dish was finished off perfectly by a rich red wine jus. My husband’s fish and chips were presented on a wooden tray lined with Lloyds Kitchen newspaper and accompanied by two silver buckets; one filled with chunky chips and the other mushy peas. The dish was absolutely delicious, particularly the chefs own tempura batter, which was light yet indulgent.

Next came the pudding. Being a bit of a self-professed cheesecake connoisseur, I was immediately drawn to the lemon meringue cheesecake (£6) whilst my husband opted for the fruity eton mess (£5). The cheesecake consisted of a cool, creamy lemon center, topped with a warm, fluffy layer of toasted meringue and was (I do not say this lightly) the best cheesecake I have ever eaten. In fact, I’m already planning my next visit to Lloyds Kitchen for this dessert alone. The eton mess delivered everything it promised – crunchy meringues, Devonshire whipped cream and a tangy fruit compote – all served in a rather funky jam jar. Though in truth, I think it was overshadowed slightly by my stunning cheesecake!

When I interviewed Lloyd and asked about his vision for Lloyds Kitchen, he mentioned that his intention was to create a ‘London vibe’ in Exeter and to deliver excellent food using local produce. Having sampled the restaurant I can honestly say that I feel he has delivered on both counts. I certainly felt like I had been temporarily teleported to Covent Garden with the modern, stylish décor, the lively atmosphere, and the delicious, beautifully presented food. Lloyd’s Kitchen is a welcome addition to Exeter’s dining scene and I look forward to returning soon to sample the popular lunchtime menu. 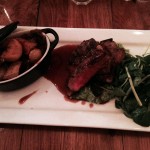 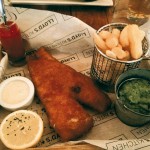 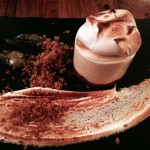 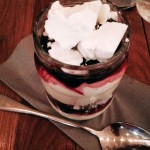 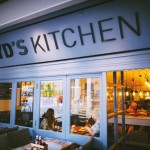 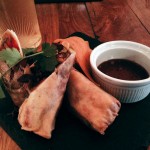