It’s safe to say that Harry’s Restaurant has been on my to-dine list for quite some time now. The lure of the warm and inviting interior always called to me as I peered through the windows whilst driving past, but every time I’ve tried to book – which I must confess, is always at the very last minute – I’ve been unable to get a table. When I was invited to come along to try one of Exeter’s foodie treasures, I certainly wasn’t going to hesitate in saying yes.

For over 20 years, Harry’s Restaurant has sat just away from the hustle and bustle of Exeter’s city centre in the convenient location of Longbrook Street, proudly serving high quality, locally sourced produce. Working with well-revered suppliers such as Wholesome Hog, Emma’s Bread, Quickes Farm and Creedy Carver Chicken, Harry’s ensures that local, quality food is just a given.

On arrival, we were warmly welcomed by our waitress, and guided to our table. The brown and cream leather seats worked well with the interesting wall art, and the contrasting dark and light colour scheme created a rustic-chic ambience. We were lucky enough to have a clarinettist playing live music which, over the sound of people talking and laughing, made for a completely relaxing experience where you feel like you’re in your own private space even with so many people around you. You can also see into the kitchen which I always particularly like as you know there are no hidden surprises.

Before I’d even sat down I had spied The Bourbon Hardshake (£7) on the special board and knew that I had to try it. Two of my favourite things, bourbon whiskey and milkshakes, combined with chocolate fudge sauce had to be a recipe for success. I loved the initial chocolate hit, then the strong taste of the bourbon followed by a chocolatey after-taste – I could have knocked these back all night.

To start, we opted for the Beer & Cheese Croquettes (£6) served with apple chilli jelly, and Smoked Salmon Paté (£7), accompanied by pickled celery and sourdough toast. Served on slate and wooden board, both dishes were presented beautifully and maintained the rustic-chic feel. The croquettes were crisp on the outside to provide a delightful crunch before reaching the soft and gooey centre. The apple chilli jelly offers a sweetness to balance the flavours for a harmonious taste. The pickled celery on top of the pâté was diced in small chunks providing a kick without overpowering the flavour of the salmon. The serving of pâté was notably huge too!

After much deliberation, for our mains we settled on the Rump of Spring Lamb (£18), served with dauphinoise potato, provençal vegetables and salsa verde, and the Creedy Carver Chicken Breast (£12), with dressed rocket leaves, Parmesan, garlic mayo and French fries. Both dishes were, once again, served attractively, and we particularly loved how the dauphinoise potato was crafted into an eye-catching square. Both cuts of meat were beautifully tender, full of flavour and very generous in size. The mint sauce drizzled over the lamb provided a tangy taste, balanced with the sweetness of the soft peppers and courgettes. The garlic sauce with the chicken was rich but not overpowering, with a hint of lemon to keep things light and zesty.

Looking at the dessert menu, ‘Harry’s Heart Attack’ (£10) immediately grabbed my attention. A challenging mix of chocolate brownies, marshmallows and ice cream, plus a whole variety of chocolate bars and treats topped with whipped cream and chocolate fudge sauce. ‘Two will struggle and one will fail’ was the warning on the menu, and after watching two children across the restaurant slump in their seats with chocolate around their mouths looking defeated, I decided to wait for another day – especially as we were feeling mighty full from our first two courses!

Instead we opted for a mixture of sorbet (lime & raspberry, £4.50) and the After Eight Sundae (£7), mint choc chip ice cream with chocolate sauce, pieces of After Eight, Kendal Mint Cake and whipped cream on top. The sorbet was definitely a winner after such a big meal, and the minty sundae made for a refreshing follow-up while still being indulgent.

When finally visiting a restaurant that you’ve longed to try for so long, it’s natural to turn up with high expectations and I was worried this would affect my experience. But there’s good reason that Harry’s is often fully booked. The warm ambience, the delicious food and for me, the bourbon hardshake alone is well worth visiting for. Take my advice: don’t be like me and make sure you get booked early, you certainly won’t regret it. 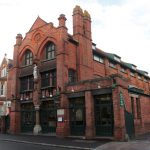 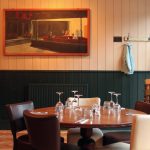 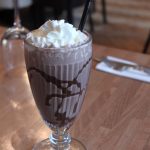 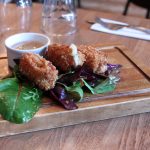 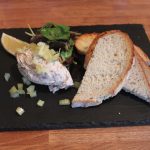 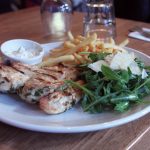 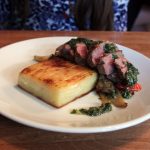 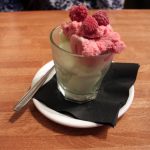 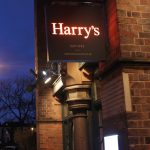