One Magazine’s Esther Baker and family escape from the ordinary at Exmouth’s first escape room experience.

My son and two of his friends had spent weeks working hard to get through their exams. With 12 weeks of summer holiday laid out in front of them, how could we keep their brains sharp and avoid stagnation?!

Escape Rooms had always intrigued me. Both my son & I are lovers of puzzles, logic problems, detective programmes and books, so it felt like something in which we might actually excel. So when we heard that this latest activity was setting up here in Exmouth, we jumped at the chance to give it a try.

But what is an escape room, I hear you ask. The concept started in 2004 in Japan. Willing participants are locked in a room and are challenged with a variety of puzzles set to an immersive storyline to provide a thrilling experience against the clock. Usually you have 60 minutes to crack the codes, solve the clues and make your escape. There are rooms and puzzles to suit beginners and seasoned escapers alike, and although you’re technically locked in the room, you’re always monitored by staff who are on hand to give clues if required and will of course let you out if you really need to.

Five years ago, escape rooms started popping up in this country, and it was in Maidstone two years ago, that the owners of EXCAPE, Dan and his wife Helen, first tried one and caught the bug. To date the couple have tried over 15 different rooms, many in other countries too, such as Kuala Lumpur & Bali. Having been a painter and decorator for many years and needing a change (as if becoming a new Dad wasn’t enough!), Dan decided to indulge his passion for Escape Rooms and create his own. He started work about a year ago, did a lot of research and met up with other Escape Room designers, and finally opened up his own room just a couple of months ago in Rolle Street, Exmouth – the result is testament to what following a dream and working hard to achieve it can do.

We enter the room and the game’s afoot. Professor Moriarty is up to no good and we’re tasked with having to find a mole in MI6, foil a bomb plot and save the world, freeing ourselves from the room in the process – no pressure!

The quickest it had been completed was 45mins but that was a team of six, we were only four, and apparently, it’s about a 60/40 split between those who make it within the hour and those that don’t. This information only fuelled our competitive streaks and spurred us on to make our escape.

I pushed aside thoughts of claustrophobia and was reassured to learn that there was CCTV where Dan would always be watching and on-hand if required. We had a walkie talkie to get in touch at any point plus the door was linked to the fire alarm, so if it went off, the door would open automatically.

From then on, we spent our time working systematically through the puzzles and trying not to get too flustered by the timer. I won’t go into anymore detail here as, of course, I can’t spoil the surprise! Nevertheless, we left it until the nail-biting end to get out – at a (slightly disappointing but better late than never) 59 minutes!

Their current room is actually called The Game’s Afoot and has a Sherlock Holmes theme as said previously. Dan plans to create a new room later in the year – a Mad Scientist theme – and a third room next year. At £20 per person or £12 for under 14s, the experience works out as good value for how immersive the room is and the time you spend at EXCAPE. Dan recommends a minimum age of 8-years-old to be fully involved. There is no maximum age! You can easily book online and see availability well in advance too.

I really can’t wait to come back and do another one. In the meantime, I shall be booking again for my husband and younger son to see if they can manage it, but secretly I’m hoping that we’ll be the ones who retain the bragging rights. 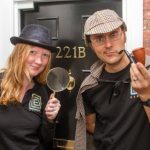 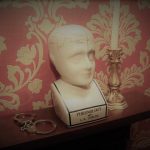 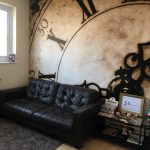