Meet the new Exeter restaurant on the scene that’s redefining chicken as you know it.

‘Prepare to have your mind blown by chicken’. That’s how I was invited to one of Exeter’s newest city centre restaurants.

Modestly positioned on Sidwell Street, in what was previously a well-known spot for hip, indulgent burgers, some might say that Eat the Bird has big shoes to fill. But as we stepped inside and up to the front counter, we realised immediately that this new eatery has very quickly established its own vibe.

A raw décor, casual but trendy-styled serving staff and a prominently placed kitchen housed in a shipping container. Somehow it felt loud and bold, especially with the words ‘Funky Fried Chicken’ lettered from ceiling to floor, yet completely relaxed and welcoming. 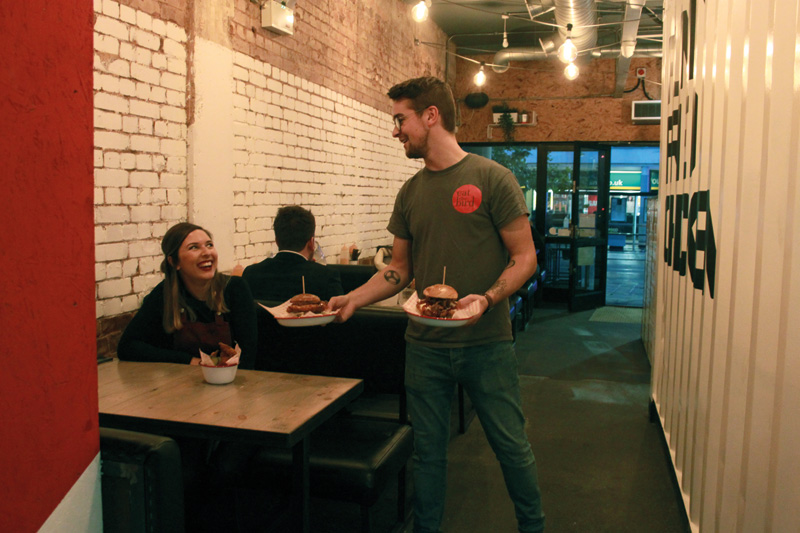 As we sat down, with an extensive menu in front of us, restaurant manager Adam told us with friendly confidence: ‘tonight, you’ll be eating the best chicken you’ve ever had.’ Bar set.

Eat the Bird is recreating the authentic food and flavours you’d expect from a ‘Deep South’ chicken house. Particular inspiration comes from the Nashville Hot style of making chicken where legend has it that a 1930’s Tennessee chap – James Thornton Prince – was served a huge portion of fried chicken loaded with hot spice by his girlfriend as a way of exacting her revenge for his infidelity. But instead of pain there was pleasure. So much so that he took the recipe from her, started his own chicken shack in Nashville and Nashville Hot Chicken was born.

At Eat the Bird, chilli powders, Nashville hot oil and a whole host of herbs and spices combine with some serious chicken prep. Here, the chicken is brined for 3-4 hours, making the muscles tense up, so that when placed in the buttermilk it relaxes the chicken and soaks it up along with the spices to make an incredibly moist, flavoursome final product. The end result: that sensational southern taste.

Leave any ideas of delicate dining at the door. This is a southern experience too which means it’s a messy affair. Be prepared to get stuck in with your hands (don’t worry, there are plenty of napkins).

To start us off, Adam recommended we try the Buffalo Chicken Wings (£4), and Deep-Fried Pickles – aka Frickles (£3.50) which came with their own dips. There are two further sauces on the table – Frank’s Hot Sauce and the restaurant’s own Comeback Sauce – essentially, a gentle spicy mayo that goes above and beyond and works so well to soothe the spice fest that ensues. It’s so good, you’ll keep going back for more (duh). 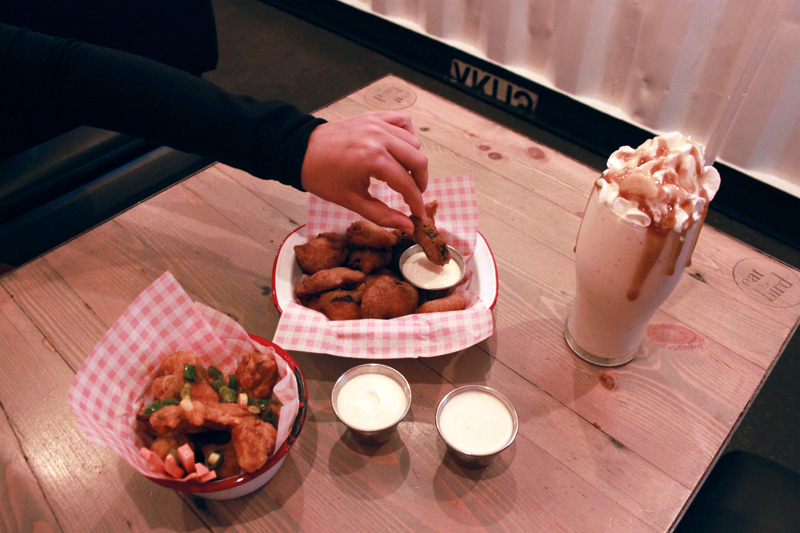 Southern cuisine is nothing without the heat (although if that’s not your thing you can go mild) and lovers of hot and spicy chicken will be excited to hear that at Eat the Bird, hot means hot. We asked to try the Nashville hot boneless chicken tenders (£6.50) and were advised on how to choose our level of heat. As someone who likes a bit of a kick but would be reaching for a glass of milk after finishing a vindaloo, we were advised that medium would be just the right level of heat for me but would probably be equivalent to a ‘hot’ elsewhere. Here though, above medium are another three levels of hotness going all the way up to ‘X-treme’ thanks to the Carolina Reaper chilli – the hottest chilli in the world – which averages a whopping 1,500,000 on the Scoville scale. Yikes.

The burger selection is fun and varied, and with it comes a variety of sides and fries options, with the chance to make them as dirty as you like. 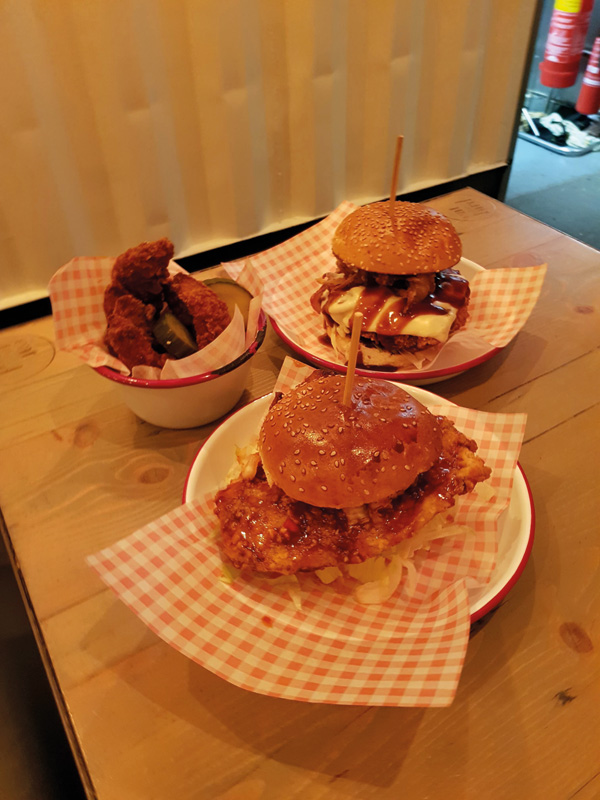 The Chicktator – Korean BBQ sauce and homemade Kimchi fermented in-house over six weeks – is unique and impressive, while Proper Filth is a real crowd favourite. Smoked bacon, jack cheese, and chipotle bbq sauce are always a winning combination. Add to this crispy fried tobacco onions which have recently replaced onion rings to shake things up a little. It’s a win from me and it shows that these guys aren’t afraid to make changes to do what’s best.

What’s more, Eat the Bird is a chicken restaurant with a vegan menu as extensive as its chicken menu. Sounds almost unbelievable I know, but stick with me. The secret is seitan. Seitan is made by mixing gluten powder with tofu, herbs and spices which is then poached for around an hour. You’re then left with a product that is very similar in texture to chicken and can be cooked in exactly the same ways.

If you’ve got a vegan friend then chances are, the vegan is the decisionmaker on where to eat. Eat the Bird don’t just provide a vegan option, they have made an entirely inclusive menu for vegans and meat-eaters alike. That’s rare. 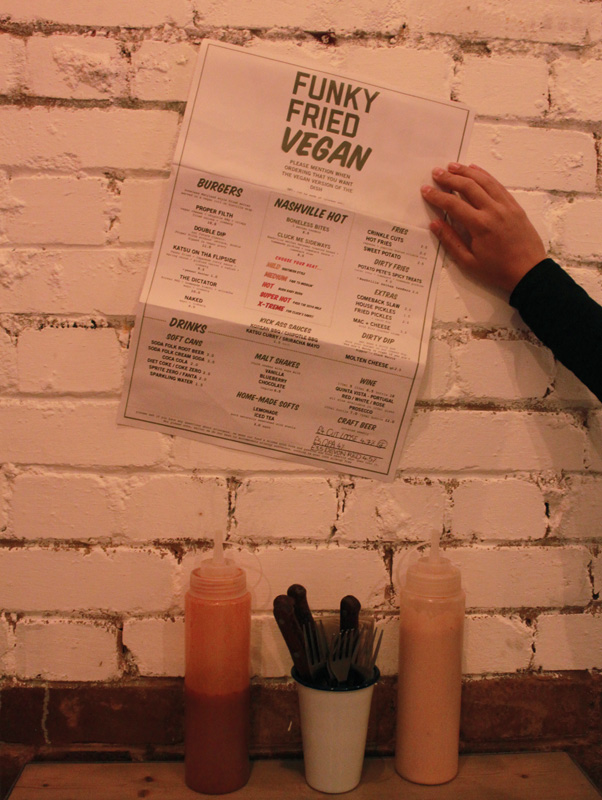 With a strong following in Taunton where the restaurant began, Eat the Bird Exeter is just the second restaurant of this exciting and relatively new brand. It’s relaxed, fresh, and I really believe it’s reinventing how Exeter does chicken. Watch out, there’s a new bird in town.