One Magazine’s Bruce Hetherington recently went along to Swanaford Estate, a young vineyard in the Teign Valley, to meet up with the owners and winemakers Ben and Caroline Goulden.

In 2012 Ben and Caroline Goulden left high flying jobs with Sky to branch out, literally, into winemaking. It has been a labour of love, sweat and some tears.

“You have to be fit or have deep pockets to pull this off,” says Ben. Although diplomas in vineyard management and winemaking from Plumpton helped, nothing prepared the couple for the scale of hard physical work required.

Caroline agrees. “We planted 10,000 vines that year, which required 7 tonnes of steel cable for them to grow on. Then for five years we’ve tended the vineyard and fought against every blade of grass, every bug and every weed that tried to invade until the vines finally reached maturity for harvesting.

“That coincided with an absolutely bumper crop, 30 tonnes of grapes – all of which were picked by hand by us and our friends last year!”
Caroline and Ben are lucky to have such willing friends, but they also had the good fortune to start their vineyard five years ago. It has come of age as others realise the potential, with a record three million new vines planted in the UK in 2019.

The climate in the famous French winegrowing regions of Champagne and Burgundy has been two or three degrees too warm in recent years for ideal conditions, while regions of the UK including Devon now boast the kind of weather that lends itself to the ‘cool and flinty’ varieties of grape needed for sparkling wines and top notch whites.

Note the distinction between ‘weather’ and ‘climate’! A climate is something relatively predictable…weather however is not, and Ben and Caroline have become obsessive long-range weather forecast watchers.

It turns out there are two very important moments in the life of a grape. First the couple of weeks, normally around Wimbledon, when a very humble flower appears on the vines. It doesn’t look like much, but it doesn’t like being drowned and it really doesn’t like hail. If those weeks are OK, then that’s half the battle.

The second key moment is the length of ‘autumn’, towards the end of September and early October when the grapes really benefit from a long autumn before harvesting.

Both moments in 2018, and the long hot summer in between, led to the UK’s most successful vintage yielding some 15.6 million bottles of still and sparkling wine (sparkling makes up 69% of all UK wines) outgunning by some distance the average annual production of 5.5 million bottles.

“Fortunately friends from up and down the valley came and helped out, and over six weeks we hand-picked and pressed every grape ourselves,” says Ben who admits they had to check into a health spa for two days after that ordeal to recover.

This year Swanaford is throwing open the grape picking to anyone who would like to volunteer for a truly immersive vineyard experience. And there’ll be a post-harvest feast to thank everyone who helps.

Caroline says the nuances of the English countryside add to their wines with a ‘hint of the hedgerow’ and a certain taste of ‘an English summer’ with traces of elderflower and the Devon apple crispness appearing on the palate.

The Teign plays a part as the river runs along the south east flank of the vineyard, and that moves the air around, helping to mitigate any hard frosts, and contributing to the fresh winds that blow down the valley. The slopes are south east facing and very open allowing for the cultivation of key Champagne grapes namely Chardonnay, Pinot Meunier and Pinot Noir for the Classic Cuve’e and the reliable German varietals of Baachus and Siegrebbe to produce approachable, easy-drinking white wines.

Swanaford itself is set in an idyllic location below Bridford, and we highly recommend the tour to get an understanding of what it takes to start a vineyard, and the chance to sample the result.

For more information or to book a tour, visit www.swanaford.com 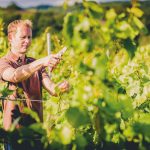 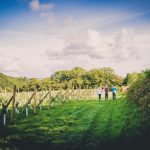 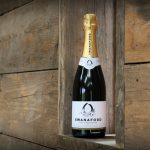 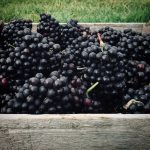 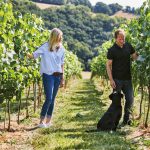