Q: How did you get into Trials riding? Was it something you started from a young age?
I started riding bikes just to and from school actually. Then one day I met some guys in Exeter that were riding up and down some steps and got totally hooked, I was 13 then, fairly old for a competition rider to start.

Q: At what point did you think, hang on, I could turn this hobby into a career?
To be honest I have never really had that thought, it just kind of happened. I worked as a bike mechanic after I left school. I was asked to do the occasional show at the weekends and all the rest of the time I was competing. Then one thing led to another and here I am today.

Q: Trials riding requires more than just your regular push-bike right?
Oh yes, it’s definitely not your average bike. A trials bike has no seat for a start, to give you maximum movement over the bike for balance and control. The wheel base of the bike is also longer than a standard bike and it only has one gear (18-15 ratio) which is a medium to low gear for maximum acceleration. Then there are the brakes. I run Racing Line Hydraulic rim brakes on my Echo SL bike, they are really powerful and there is no modulation, just on or off! All this and the super strong tyres and wheels and it still only weighs around 8.3kg!

Q: You’ve teamed up with Saltrock as one of their brand ambassadors. How did this come about?
I have, and it’s great! It came about through a mutual friend a few years back. They help me in various ways, like promotion and banners etc for my shows and help me get to events. It’s a big task trying to train, compete, ride shows, set up events, manage my riders and travel a lot, but they really help me to get through. Also with injuries from time to time, such as my recent three fractures in my foot, it really helps having their backing.

Q: You’re now one of the most successful professional mountain bike athletes in the UK, being ranked in the top 10 in the world for the past six years which is some achievement! What has been your most proud accomplishment during your career?
That’s a tricky one! I’m happy to have my world records, and podium finishes in Japan and Switzerland have been great. But I guess I am most proud of my lifestyle. I am not a 9-5 standard life kind of guy, so I’m proud that I managed to step away from the mainstream and create a pretty cool lifestyle for myself.

Q: You’ve developed something of a habit of breaking world records on your bike. What’s your total now?
I think its five now that I have broken. It’s probably the ‘most jumps between two platforms in one minute’ record, particularly because of the names of the people that have had the record before me and that tried to beat me and didn’t – many national and world champions. It’s a good record for me, you have to be fast and have good endurance, so it plays to my strengths.

Q: Living in Devon, you have a whole variety of terrains on your doorstep. Has this helped shape your love of trials riding?
Definitely! I love Devon and especially Dartmoor. I spend a lot of time riding different locations and finding new challenges. It helps set me up for competitions on all kinds of terrain. Lots of other riders come and stay with me because I have such great places to ride.

Q: You’ve recently ridden at the Croyde View Festival, as well as the Devon County Show but you also get to travel the world and ride in a whole host of exciting locations. How does it feel coming back home and riding in your local area?
I do get to ride all over the world, later this year I will be doing a bit of a tour and going to Beijing, Shanghai, Warsaw and then London. But riding shows at home is great, especially at events like the Croyde View Festival. The crowds are so nice and the location is beautiful. Also I get to go home at the end of the day rather than to a hotel room which feels great!

Q: Your sport requires a lot of practise and training. How do you keep yourself motivated?
I ride with as many people as I can, but also I get a lot of motivation from just the rewarding feeling of training and getting something right. When you get a move perfect and it feels powerful and controlled, effortless in a weird way, that is the best feeling. You can’t buy that and it’s worth working hard for. Plus having areas like Bone Hill on Dartmoor to train, it’s just such a nice place to be on a sunny day, I wouldn’t want to be doing anything else!

Q: Do you take part in any other types of riding or other extreme sports?
I train at Crossfit Exeter and I also Climb at the Quay Climbing Centre. Climbing has become a big passion for me over the last year. I started last March to aid my recovery from a back injury and this year I competed in the British Boulder Championships! I wasn’t the best, but I wasn’t last either. I also ride a motorbike which is my “relaxing sport”.

Q: What’s next in the pipeline for Andrei? Any more world records you’re hoping to break?
Well, there is one more record I would like to break, but this I can’t talk about at the moment… Next up for me is the second series of Ninja Warrior UK, then a big event in France, then the Deep Water Solo Competition here in Exeter, then the next day the UCI World Championships start in Andorra! Not to mention the eight shows between these, and that’s just the next 4 weeks!

Find out what Andrei’s up to next on his website: www.andreiburton.co.uk 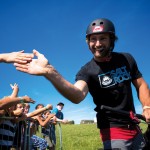 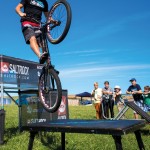 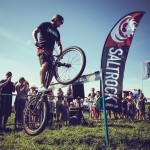 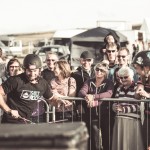 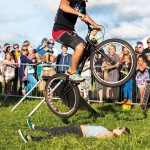 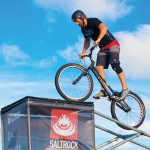