One Magazine editor, Rachael D’Cruze Sharpe chatted to Sir Ranulph Fiennes ahead of him becoming the oldest person to ever complete The Marathon des Sables, conquering the 156 miles in the blistering 50°C heat of the Saharan Desert last month…

The Guinness Book of Records described Sir Ranulph Fiennes as; “the world’s greatest living explorer” back in 1984. Since then he’s continued, even though now in his 70’s, to break many world records and led many more expeditions to remote regions. We spoke to him a few weeks before he headed off to Morocco to compete in The Marathon des Sables where he would aim to conquer 156 miles in 50°C, over six days. Talking about his training program, Sir Ranulph says: “My trainer Rory Coleman did, and does, advise anyone competing in the Marathon des Sables to train on running machines in a room heated to 40–50 degrees. I would have taken advantage of this but my current book contract means I have to write fifteen hundred words per day, so I’ve no time for heat chambers.” Sir Ranulphs training programme, devised by Rory Coleman, who has done the Marathon de Sables himself nine times and has donated all of his training fee to Marie Curie, consists of jogging for an hour a day, four times per week and once a week going on a four hour jog. Sir Ranulph has been doing this for the last five months. “It’s more of a shuffle than a jog now. It’s unfortunate and I find it a nuisance,” says Sir Ranulph talking about the impact of his age on his training. “Without training you can do nothing,” he adds.

In addition to his weekly training program, Sir Ranulph has done three different marathons within the last three months. The last of these was 32 miles at the Sandstone trail in Cheshire, where he carried a 4kg rucksack. “The Marathon des Sables will be 7kg. The fact that I now find 7kg a great ache on my back and neck is a problem of life. I’m not looking forward to the heat or weight,” he says earnestly. “Completion is very important and I will try my upmost to finish, but I can’t be sure.” Adds Sir Ranulph.

Talking of his long term sponsor, Sir Ranulph says: Paul Sykes will always sponsor me as long as I’m doing it for Marie Curie, unless he thinks I’m going to die.” To this end, Sir Ranulph has spent time in two different heat chambers, having his heart tested to check it is strong enough for him to do the Marathon des Sables.

Having overcome two heart attacks, undergone a double heart bypass and a cancer operation, I was keen to know what inspires Sir Ranulph to keep pushing his body to its limit. “On my gravestone I would be very happy with; ‘Raised 20 million quid for charity, not 16.8 million – it sort of seems better.” Sir Ranulph talks about how Marie Curie has now spread nurses to those with terminal illness to include, but not exclusively, cancer. “My late wife died of cancer. The last few months of her life were made bearable by the Marie Curie nurses. There are areas of the UK where these nurses aren’t available,” he explains.

At the time we spoke to Sir Ranulph, he had raised 47k for Marie Curie for his monumental Marathon des Sables challenge. That total has now reached £95k and continues to grow as the public support his tremendous feat of becoming the oldest Briton to complete The Marathon des Sables. 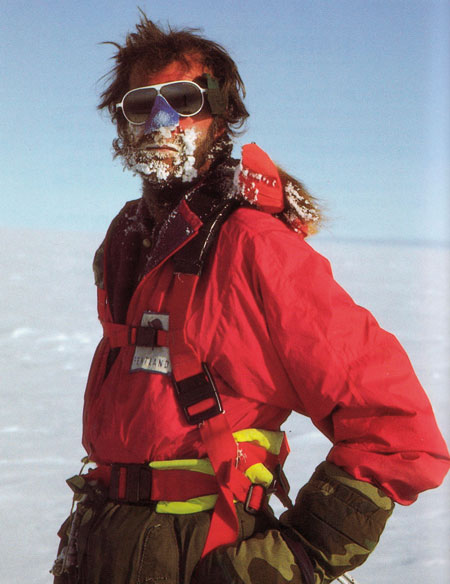