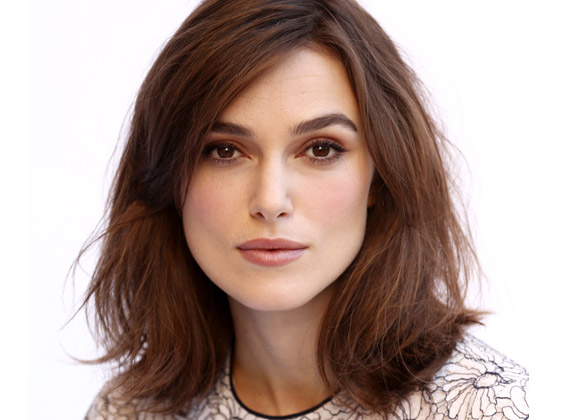 The vivacious, unstoppable critically acclaimed explains why she won’t be defined by costume dramas.

Keira Knightley is one of Hollywood’s best known British exports. Since starring in Bend It Like Beckham in 2002, the actress has gone on to play a key part in the successes of Disney’s Pirates of the Caribbean series, and has garnered widespread acclaim for her roles in the likes of Pride and Prejudice, Atonement and The Edge of Love. Most recently, Knightley has starred alongside Benedict Cumberbatch in The Imitation Game; a film chronicling the fascinating true story of Alan Turing and the Enigma machine, which Winston Churchill himself proclaimed played an important part in the Allies’ defeat of the Nazis in World War II.
“I had heard of Enigma,” Keira says, “but it was all classified until the 90s and I am sure in my lessons about the Second World War they mentioned about the breaking of the Enigma codes but they didn’t mention any of the names.” The actress – who portrays code breaker Joan Clarke – believed in the characters being portrayed, despite the secrecy surrounding the subject matter. “It is arguably one of the most important things that happened in the Second World War for the Allies. It’s extraordinary, particularly being British and him [Turing] being British that he wasn’t better known than he was. I think most people in England now have at least heard of him.”

When asked whether she prefers contemporary settings or the period costume dramas she has become renowned for, Knightley says: “I don’t think of them as two different genres. I would really only look for story or for character and it doesn’t really matter when a movie is set. The bonus of not doing a period piece is that you get more sleep, because you don’t have to be up at 5am for make-up and wardrobe!” she laughs. “But apart from that, it really only is in the character, it’s not really the setting. I enjoy period pieces because I like doing the research, they often require more imagination.”
Knightley continues: “You have to imagine the world, the difference in culture and you have to create the entire world, as opposed to today, where we know exactly what it is and we know how we behave, we know what we do, history as we know it. That’s kind of easy, and I enjoy the kind of extra work that is required from a period piece.”

The actress, still in her late 20s, is reportedly among the hardest working actresses in the business, having gained critical recognition with Academy Award, Golden Globe and BAFTA nominations consistently for the better part of a decade. So does Knightley plan on slowing down anytime soon? “In the last five years, you have to do way more publicity than you ever had to before then. For the sake of my sanity, I cannot publicise four different movies at once, so I have to be selective. The nice thing about getting older is you learn to pace yourself – well, at least sometimes…”