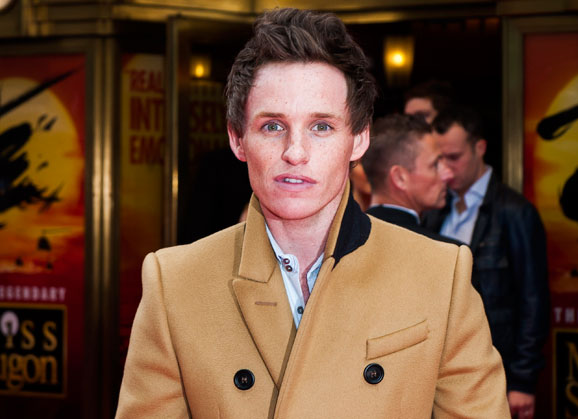 Eddie Redmayne, alongside close pal Benedict Cumberbatch, is bringing Britain centre stage in the Oscar’s ‘Leading Man’ game for his part as Stephen Hawking in The Theory of Everything. His astonishing portrayal of theoretical physicist has been the talk of the town, but then that’s hardly surprising. Redmayne already has an Olivier Award and a Tony for his stage work, along with a win at this year’s Golden Globes and a Screen Actors Guild Award for Best Male Actor in a Leading Role to boot.

The Hawking memoir charts the acclaimed scientist’s earlier life as a scholar at Cambridge and his triumph over adversity, particularly his diagnosis of motor neuron disease. Preparing for the part of Hawking took Redmayne “four months of solid research” and the accomplished actor admits he wondered what he’d gotten himself into “pretty much daily.”

“I got the part and it was like – ‘Yes, I did it!’ Then it was like ‘ahhh’ … a sucker punch of fear,” he says. While Redmayne already had life as a Cambridge student down to a tee, having spent his own undergraduate years there studying History of Art, understanding the intricacies of motor neurone disease was a new experience for the actor, and he was stunned at the reception he received when meeting those suffering from the disease. “There were so many people who lets us into their lives and the generosity of spirit of letting us into their homes. It’s a pretty brutal disease and one that’s really difficult to get your head around. Someone described it as being in a prison where the walls are getting smaller every day.” Redmayne also met with doctors, nurses, and patients at the Queen Square Centre for Neuromuscular Disease in London for his research. Redmayne admits that, “sometimes there was emergency acupuncture sessions and a couple Nurofen,” involved in the sheer physical performance of playing Hawking, and he humbly dedicated his Screen Actors Guild win to those suffering from the disease, as well as Stephen and his wife Jane themselves.

As Redmayne attests, when given the opportunity to play someone so extraordinary, “you have no option but to give it your everything.” And the inscrutable scientist has both a powerful mind and presence, as the actor remembers well. “He came in to see shooting at one point,” he says. “We were filming the May Ball scene and we had three sets of fireworks. The fireworks were quite expensive and we only had three takes at it. And Stephen arrives in his chair, flanked by these nurses and on cue, the fireworks went off and he was there, silhouetted by the glow of the fireworks and soft lit by his computer screen.”

Together with his co-star Felicity Jones, playing Hawking’s wife Jane, Redmayne brought the scientist’s early adulthood back to life. Pairing the two British starlets was a perfect match; they had both worked at London’s Donmar Warehouse theatre, and Jones has also received her first Oscar nomination for her performance in the movie.

Redmayne’s research period may have been exhausting, but if one thing is clear, he’s proved himself a stickler for detail. “When I was filming Jupiter Ascending, I was playing this baron from outer space and I had to have these long finger nails and [Hannah, his then-fiancé] was like, ‘Really, you have to have long finger nails?’

“I then read in Jane’s book (the memoir on which the film is based) that Stephen had grown his fingernails aged twenty one as an act of rebellion, so I had to say, ‘You know babe, I have to start growing them again for this film.’ And she’s like, ‘Really! The nails are back.’” When they watched the film back? “There was one close up of the nails and she was like, ‘Babe, was it really worth it for that one scene? Really??’” he laughs.

Nails trimmed, Redmayne tied the knot with Hannah Bagshawe in December in a winter-wonderland inspired Babington House ceremony. No longer an eligible bachelor, Redmayne still has plenty of young admirers, perhaps due to his fresh faced freckled look – he doesn’t look near his 32 years! “I have been told that a lot,” he laughs. But he assures us – “I am definitely greying!”

Perhaps playing 20-year-olds does that to you. Redmayne has swung from his Burberry days to young hero Marius Pontmercy in Les Misérables, to an earlier Stephen Hawking with apparent ease. Oscar win or not, the real question is: what comes next?